Japanese Association of the Club of Rome officially launched 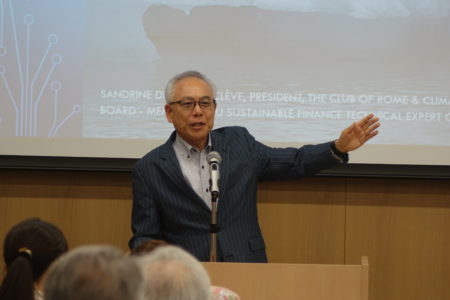 The Japanese Association of the Club of Rome was officially launched on August 7th 2019 at Chubu University in Kasugai, Japan.

The official launch of the Association also provided the occasion for a high level symposium “Operation Manual of our Home, one Planet EARTH for 22nd Century” at the University. This was an excellent opportunity for discussions on climate emergency and alternative approaches to solutions including Japanese philosophy, new technologies and quality of life-based policy making.

Other speakers included Tomoyo Nonaka (GAIA Initiative and Member of the Club of Rome), Osamu Ishihara (President of Chubu University), Hiromichi Fukui (Director of the International GIS Center, Chubu University) and Osamu Motojima (Board of Trustees at Chubu University). The audience included professors/researchers, politicians, practitioners from private firms such as Japanese high-speed rail operators, members of the Chamber of Commerce, local community activists, national and local governmental officers, and students. After the Seminar several prominent and globally recognized scientists expressed a desire to join the new Association and help support the Club of Rome’s goals.

The Symposium laid the path for future work to be undertaken by the Japanese association in particular around the contributions that Japanese philosophy, unique advanced technologies and quality of life based policies can make globally. The Association now sits in the University due to the generosity of the Universities Chancellor and the Universities dedication to sustainable development and climate change solutions.

On August 2nd Mrs. Dixson-Declève gave a keynote address at the International Forum for Sustainable Asia and the Pacific (ISAP) 2019 hosted by the Institute for Global Environmental Strategies (IGES). After a meeting with Prof Kazuhiko Takeuchi IGES President, it was agreed that further discussions and possibly collaboration around sustainable finance and the new EU taxonomy proposal could be helpful for Japan and future policy direction.