The Club of Rome calls for an ambitious, transformative European Green Deal 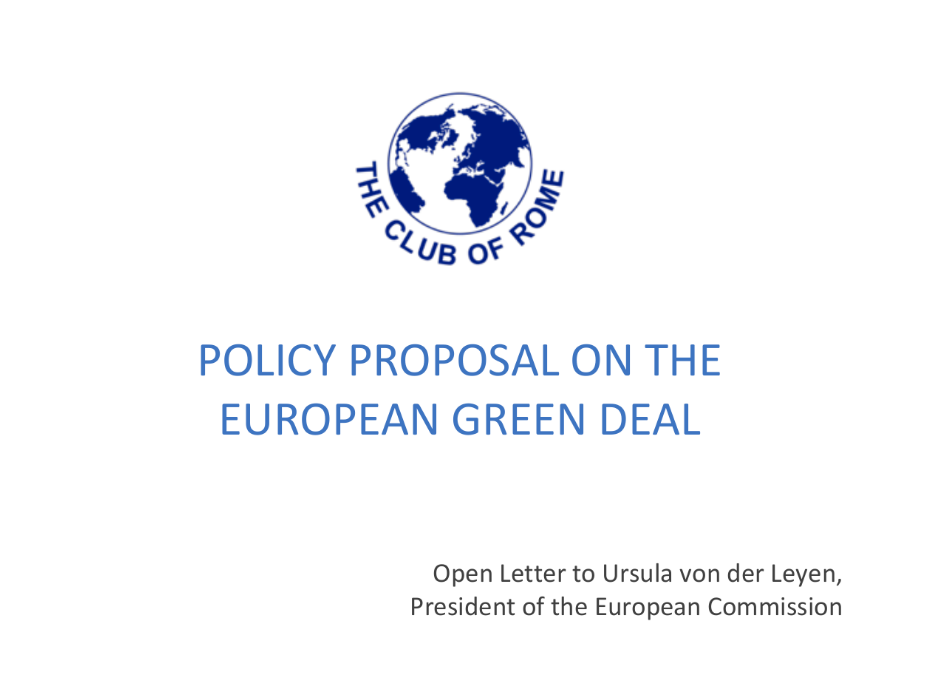 The Club of Rome congratulates European Commission president von der Leyen and vice-president Timmermans on their leadership and foresight in developing a European Green Deal (EGD). The Deal is an opportunity for Europe to show not only leadership on climate neutrality but also on economic, financial and social transformation. In an open letter to the president and her Commission, The Club of Rome welcomed the Commission’s efforts to make the Deal transformational. The Club believes that the European Green Deal could be a game-changer for Europe and European citizens. As such, the realisation of the final Deal must reflect the paradigm and systems shifts we so urgently need. The Club’s co-president, Sandrine Dixson-Declève, also noted that the way in which the Deal is framed and communicated to Europeans is as important as what it contains: “We encourage the EU’s leadership to be mindful of how the European Green Deal is perceived publicly. This Deal cannot be misleadingly dismissed as an exclusively Green initiative, but rather one which puts people, planet and prosperity equally at its core, as per the Club of Rome’s Redefining Prosperity paper to the European Commission. The proposed Deal makes most of the right noises; the issue now will be agreed timetables in line with the urgency of our challenges. Ultimately, its success lies in translating its list of ambitions into action”.

It is critical that the EGD be attuned and responsive to the voices and concerns of the people of Europe: “A new compelling vision based on core European values and integrative leadership is key to counter the separation, blaming and other tendencies of populist groups. Just transition strategies with a strengthened role for citizens and their communities will strengthen democracy and resilience in the transformation ahead“, insists Maja Goepel, Member of the Club of Rome and Secretary-General of the German Advisory Council on Global Change. “Both its initial framing and the transition process need clarity, transparency and communication to allow people to regain trust in public institutions and their commitment to stand up for the common good, in the face of special interests”, adds Ernst von Weizsäcker, Honorary President of the Club of Rome.

The Club of Rome’s recently published Planetary Emergency Plan responds to the urgent need for action, by proposing solutions on the three inextricably linked challenges of people, nature and climate. Only this kind of immediate and transformational action to address today’s climate, biodiversity, and socio-economic tipping points will enable Europe to emerge from emergency with greater resilience and citizen buy-in.

The Club of Rome’s intervention represents an urgent call on the European Commission – and indeed the EU at large – to seize the unprecedented opportunity to make this coming decade one of genuine transformation, meet the goals of the Paris agreement by keeping global temperature rise to 1.5C and, in doing so, achieve full SDG implementation.

In its submission, the Club offers a series of “transformative solutions” combining urgent action in the short-term, with fundamental shifts across social, financial and economic systems in the long term. Both, it argues, are necessary to ensure impact over the next decade and build the underpinning systems change needed through to 2050.

These proposed key systems solutions could set in motion a social and economic transformation of unprecedented proportions, as Kate Raworth, author of Doughnut Economics and Member of The Club of Rome notes: “It’s time to emerge from emergency and create the regenerative and socially just economies that the 21st century demands. Through the European Green Deal, Europe has an extraordinary chance to lead from day one action throughout the extraordinary decade that we know lies ahead”.

The Club welcomes the Deal’s proposal that Europe must move from linear to circular material flows. “Material extraction and use alone constitute 50% of GHG emissions and have an immense environmental impact. To ensure real circularity in our economic systems, we must start with shifting taxes from labour to products, materials and energy. But focusing on upstream solutions is also essential by reducing consumption in the first place and designing products that are easy to reuse and recycle. This will go beyond standards” says Anders Wijkman, former MEP and honorary president of The Club of Rome.

To underpin the shift from a high-carbon and resource-inefficient economy, major changes will also be needed to the current finance model: “The leadership shown in recent weeks by the EIB and now ECB, in understanding and acting upon the climate emergency and addressing stranded assets, is heartening. But it must not stop there. These exceptions must become the rule for all financial institutions and become incapsulated in net zero impact balance sheets” insists Peter Blom, CEO, Triodos Bank.

For further press and interview enquiries: