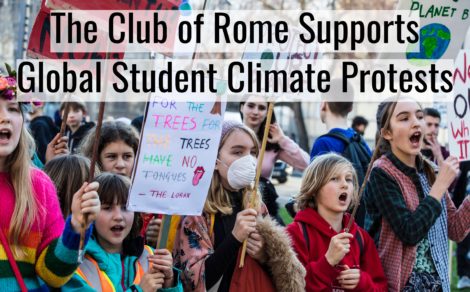 In a Statement in Support of Global Student Climate Protests the Club of Rome deems the students’ concerns to be utterly justified and calls on governments to listen to the call for urgent action from young people, scientists and experts across the globe and translate these calls into concrete Climate Emergency Plans.

In view of the global climate strikes due to take place on 15th March 2019, the Club of Rome and its members from 30 different countries are hereby issuing a statement (here) in support of the student protesters.

Sandrine Dixson-Declève, Co-President of the Club of Rome:

“Students across the world have recognized the existential threat climate change poses to humanity and our planet. They are holding leaders accountable and we believe their views are utterly justified and irrefutable. That is why we accept our responsibility in promoting climate action and call on governments to do the same and adopt emergency plans with concrete targets and timetables. Emergency action is more necessary than ever and cannot be put off any longer as we no longer have the luxury of time. We have the capabilities: we must now find the will and listen to the brave young leaders who have taken to the streets to be heard. It is time for less talk and more collaborative action on climate from governments, business leaders and citizens!”.

Dr. Mamphela Ramphele, Co President of the Club of Rome:

“Climate change is a real and present danger to the sustainability of mother earth. The continent of Africa is the most vulnerable and least resourced part of our globe to adequately deal with the consequences of climate change. This is why a number of protests being organized in countries across the continent, from Egypt to South Africa, as part of the global climate strike on 15th March, is an encouraging and very timely sign of growing civil activism in Africa on the need for urgent action on climate change“.

“People always tell me that they are so hopeful that young people are going to save the world. But they are not. There is simply not enough time to wait for us to grow up and become the ones in charge” Greta Thunberg

This week, hundreds of thousands of students in multiple cities across the globe will once again follow in the brave footsteps of Greta Thunberg by staging climate demonstrations. Their call to world leaders is simple yet true: “it is time for less talk and more action on the climate”.

We deem the students’ concerns to be utterly justified and irrefutable and will continue to play our role in ensuring ambitious climate action. These courageous young leaders point to challenges for the planet and humanity which have long been recognized by the scientists, economists, business leaders and experts within the Club of Rome*.

It has been 50 years since the “The Limits to Growth”, which alerted the world to the acute environmental and demographic challenges ahead. Decades of exponential growth in both population and consumption are now colliding with the limits of the Earth’s biosphere. We concur with the Extinction Rebellion and the student protesters that we cannot turn a blind eye to the dual tipping points of species extinction and climate change. Emergency action is more necessary than ever and cannot be put off any longer. We no longer have the luxury of time!

We know the facts. We have the solutions. We just need the political will. Global action is lagging and is often woefully inadequate, stymied by political meandering. This is why we are calling on governments across the world to listen to the call for urgent action from young people, scientists and experts and translate these calls into concrete Climate Emergency Plans with clear targets and time lines. To avoid the worst outcomes, global carbon emissions must be cut by half by 2030 and to zero by 2050. For the wealthier nations, this increases to around 80% by 2030, with full de-carbonisation less than a decade later. This is an unprecedented task, requiring a reduction rate of at least 7% annually; no country has to date achieved more than 1.5%.

The only possible response is emergency action that will transform human social, economic and financial systems. Yet we also believe that the existential threat from climate change, if heeded now, offers the possibility for a societal renaissance of unprecedented proportions. This is the vision we seek to promote – a vision of the future, which ensures well-being for the many and harmony between humanity and the planetary boundaries that protect us. A vision which speaks to the calls from young people marching on the streets in towns and cities across the world.

Engaged citizens of all ages demanding action by their politicians on climate change is of paramount importance, to hold us all accountable for delivering on our climate goals and ensuring that we seize this opportunity to sustainably transform our economies.

Let us find the vision, the leadership and the creativity to collaborate in developing constructive solutions for a decent future for present and succeeding generations. We have the capabilities: we must now find the will and listen to the enlightened youth who have taken time away from their studies to march on the streets to be heard.