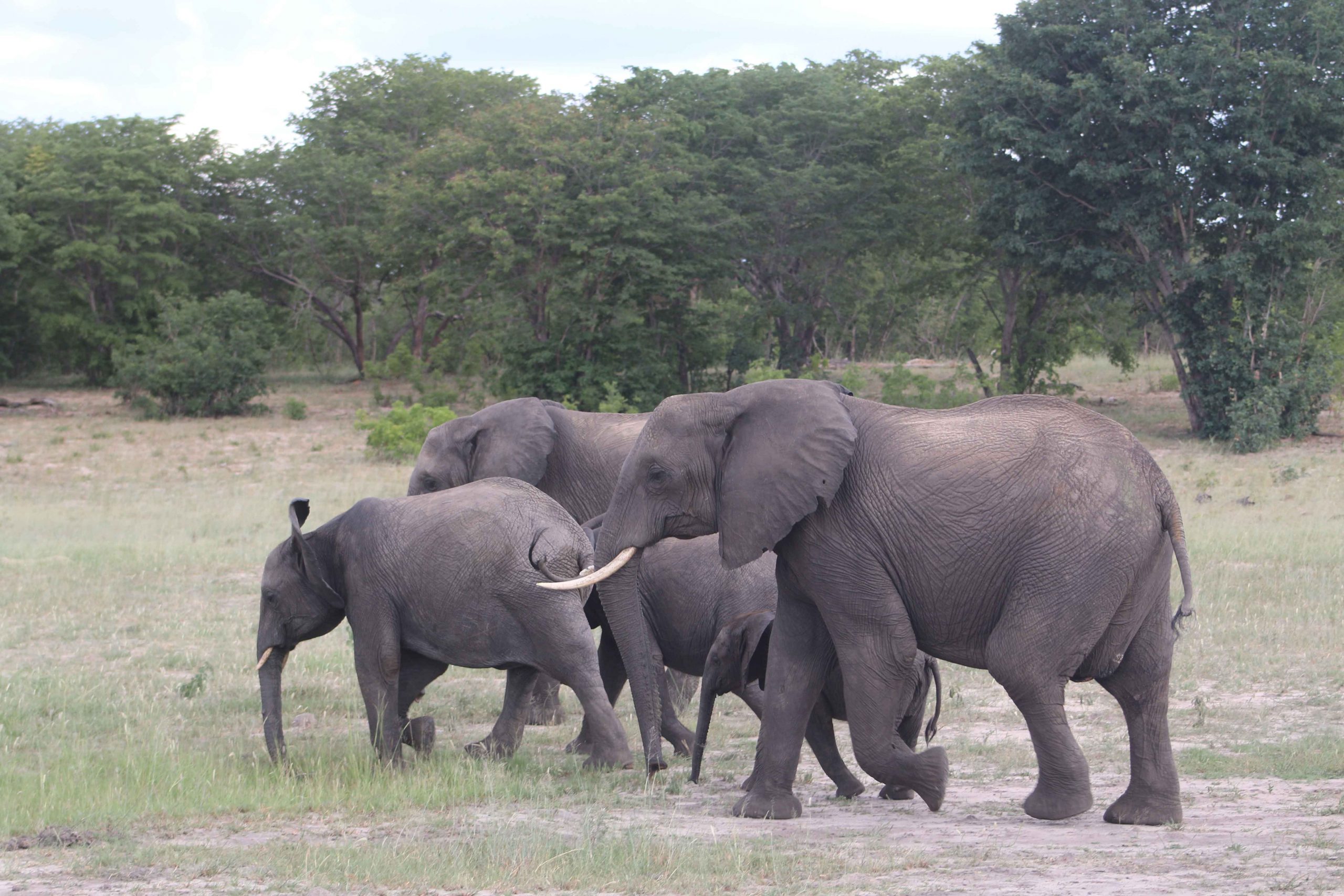 “An agenda for the conservation of Africa’s wildlife and wild lands is crucial at this time to ensure their place on the continent’s development vision to achieve sustainability of human populations and biodiversity. The overriding goal for wildlife is to conserve representative, viable and ecologically functional populations of species in their natural habitats. Africa’s wild lands should be protected so that they can grow larger in size, more interconnected, representative and able to fulfill their ecological and socio-economic roles. Without viable and ecologically functional wildlife populations and natural habitats, Africa’s economic development will slow and ultimately fail.” AWF Policy Paper – “Economic Perspectives of Conservation and Development”, Kaddu Sebunya, February 2019.

I had the privilege of going on a Safari (KiSwahili for a journey) 27th February to 1st March 2020 in Hwange National Park in Zimbabwe, with nine people led by Kaddu Sebunya. The purpose of the Safari was to explore what lessons we could learn from wildlife and wild-lands to be better stewards of these natural assets and so we can conserve and protect them for generations yet to be born.

We were welcomed by large herds of elephants, buffaloes, elands, zebras, impala and many bird species. I was struck by the unspoken yet lived ecosystem order rules they all followed to ensure their co-existence. From the lonely huge occasionally threatening elephant in must, who respects the lactating females whose focus is on rearing their young in families with strong social bonds, wandering alone in the hope of a suitably free mating partner, we learn about the social skills of animals. Animals, birds and other living creatures are living in harmony with majestic trees – some fossilized – grasses and a wide variety of plants that can only be found in Africa.
The quality of work done by partnerships between the government, private sector investors and local communities living on the boundaries between wild lands in traditional villages, provides models of how humanity could collaborate to sustain these rich ecosystems. African Wildlife Foundation, founded in 1961, has been a pioneer of conservation of Africa’s wildlife and wild-lands through promoting investments in local communities so they can see and feel the benefits of conserving their rich heritage. Significant investments are being made in rural physical and social infrastructure in the form of schools, health centers and promoting small businesses in arts and crafts to create opportune ties for shared prosperity whilst promoting sustainable well-being for people and planet.

The most enduring investment is enskilling high quality of guides who are products of intensive training of local young people in the plant and animal sciences so they can become wildlife guides and anti-poaching advocates. These training programs have also awakened inter-generational knowledge sharing as young people make sense of practices and rituals they have observed in their elders as they were growing up in their villages. Africa’s cultural and intellectual property in the form of knowledge of plants and their medicinal and other uses; animal behaviours and their habitats represents a body of knowledge that needs to be identified, documented and protected for current sustainable development of pharmaceuticals and food sources. Poaching of this IP and Africa’s genetic heritage by scientists and is an ongoing threat to benefits that should accrue to locals.
Hwange National Park also demonstrates the importance of non-intrusive wildlife conservation that treads very lightly on sensitive ecosystems. The Davison Lodge (named after the first warden of Hwange) where we stayed in safety and comfort uses materials and designs that tread very lightly on the environment. The camp has no fences but gives the right of way to elephants, zebra and leopards to roam around at night and birds to welcome the new dawn with piercing sounds and melodies. The contrast with my own country’s over-development of our national parks such as the Kruger could not be starker.

Despite the richness of African wildlife and wild-lands socio-economic development models have yet to factor in the value of these unique endowments of natural and cultural heritage of the Mother continent. As Kaddu reminded us over and over again that when we speak of Africa’s wealth we often focus only on what lies below the soil more than what is above it. The continuing extractive model of development focused on mineral resources and what investors can get out of Africa is what has fueled corruption during and in the post-colonial period.

We need to explore alternate models of development that recognize that nature has much to teach us about regenerative approaches that have been refined over millennia by our ancient ancestors. Where possible, wider economic values from landscapes should be captured from global and regional markets – such as carbon markets, payments for watershed services, and disaster risk reduction/insurance systems, but AWF experience in negotiating these payments is that the systems of accounting for the payments are overly-burdensome and the benefits are more often captured at national level, meaning that the incentives for behaviour change at local level are minimal.

The explosion of crises of fires, floods and droughts as well as life threatening diseases from viruses that have jumped the species they were living in symbiosis with (Ebola, SARS, and now Corona) are evidence of the existential crisis we face. Ancient citizens of Africa and other worlds where people lived close to nature developed taboos about what animals and plants to eat to protect themselves against eventualities of species jumps by deadly microbes as well as poisonous plants. The disrespect of those taboos poses a threat to human life as we are now witnessing.

Africa still has vast expanses of uncultivated land that has the potential to turn it into a food basket for the whole world. But this can only be possible if we adopt new ways of relating to nature of which we are a part. The most serious threat to Africa’s natural habits is exerted by food production and basic livelihoods needs. Fundamentally, this is a problem of low agricultural productivity. If Africa is to feed these people by tilling more land, there will be very little nature left on the continent. But this is not ecologically feasible because agriculture itself depends on the ecosystem services provided by nature. Transformation of agriculture is both an economic and ecological imperative.

Australian farmers battling fires, poor soils and rapid salination have much to teach us: “An agriculture cannot survive long at the expense of the natural systems that supports it and that provide it with models…… We can build one system only within another. We can have agriculture only within nature, and culture only within agriculture. At certain critical points these systems have to conform with one another or destroy one another. Under the discipline of unity, knowledge and morality come together.” (Wendell Berry in his book, The Unsettling of America).

We need to constitute an African Chapter of the Club of Rome to bring the wisdom of Africa from its ancient history and its unique habitats into the exploration of how we Emerge from Emergency with a New Civilization that better promotes well being of people and planet and shared prosperity. There are now ten full members of the CoR (see addendum to this note). Painting a vision of what a post-fossil fuel Africa and the world could look like could be a good starting point.

Africa is at an unprecedented economic, ecological and cultural tipping point. Wildlife and wild-lands play critical ecological and socio-economic roles in Africa’s development, and must therefore thrive in modern Africa. Economic development and conservation of nature are often cast as conflicting societal goals. Conservation is often seen as an impediment to exploitation of natural resources (minerals, forests), infrastructure development, cheap energy (e.g. from coal) and expansion of economic activity such as commercial agriculture and industrial investment. There is even an influential and understandably appealing response to the global initiatives on climate change and biodiversity loss mitigation to the effect that conservation is a luxury that poor countries cannot afford, that they should be allowed to follow the course that today’s industrialized countries followed namely: “develop first and clean up later.”

Africa’s or global security is not a topic that comes immediately to mind when speaking of conservation, but there are underlying threats to security and to biodiversity that are real. There is mounting evidence that resource conflicts resulting from ecological degradation is an underlying driver of peace and security challenges, particularly in the case of water and land resources and in the context of Trans-boundary systems. It follows that efforts to halt land degradation and restore forests and other natural systems are critical strategies for long-term peace and stability, particularly in Trans-boundary systems. On the front line, heavily armed, interconnected, and funded syndicates of traffickers operate across a range of illicit markets including illegal arms, human trafficking, and wildlife products. The agenda for strengthening security and protecting biodiversity is shared.

But as evidence of effects of the industrial age on the climate and nature becomes more compelling, it is persuading more and more people that extractive economic growth has reached its ecological limits. Conscientious leaders, thinkers and ordinary people, the youth in particular, are increasingly asking soul searching questions of values and meaning. Is consumption the only measure of humans?

Ecological consciousness should be an opportunity to reconcile these two goals. Are we obliged to relive history, or can we, drawing from our heritage, leapfrog into a new paradigm of progress that values harmony with nature as our ancestors did only a few generations ago? Fortuitously, our reflections, analysis and review of the evidence suggest that far from being the case. We need to Partner with the Africa Wildlife Foundation, Private sector champions, AU, African Development Bank, Academia and Think Tanks; Civil Society and Youth Groups, to champion the harnessing of Africa’s unique natural, cultural and youthful population assets to promote alternative models of regenerative socio-economic development and address the legacy of extractive economic and financial ones.

The Africa Chapter will work together within the framework of ongoing work of the Thematic Impact Hubs to bring the perspectives of those living closer to nature: innovative farmers, villagers and young people everywhere to derive lessons to inform our New Civilization work. This framework will help to address the need for recognition that conservation needs to promote Africa perspectives to enrich global conversations and interventions.
We have an opportunity especially among young people, to recognize the changing face of Africa and the hunger for ownership of defining and executing on interventions that are appropriate to specific local contexts. At the national level, destruction of wildlife endowments is increasingly resonating with African populations and they are demanding actions from their leaders. African voices need to become prominent in international conversations on conservation. We need a better balance of perspectives including those from African institutions as well as to acknowledge that the African voice and leadership in conservation is critical to winning both the fight against climate change and in development of a new economic global model.