The Club of Rome calls on European leaders to apply Well Being Economics for Recovery, Renewal and Resilience 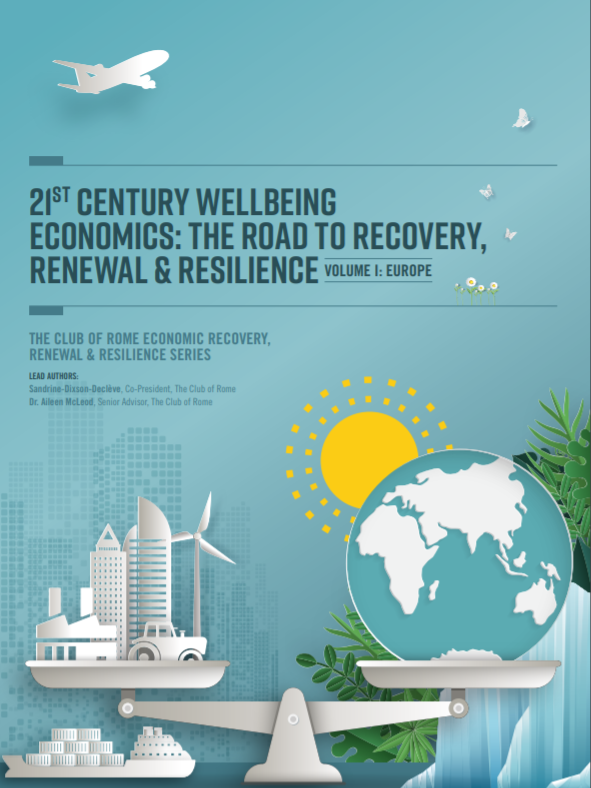 The Club of Rome has launched a new policy brief on 21st Century Wellbeing Economics and its role in EU recovery. Today leaders across Europe will be alerted to the benefits of well-being economics as an anchor for recovery, renewal and resilience.

This is the first publication in a global series urging new economic thinking and application in the wake of the COVID 19 pandemic and in preparation for future climate, biodiversity and health crises. It is a direct response to European Commission President Von der Leyen’s State of the Union address to the European Parliament last week and her recognition that COVID-19 has shown “the limits of a model that values wealth above wellbeing”.

The publication sets out a possible 21st century insurance plan for Europe’s long-term economic recovery and renewal. The time is ripe to build on years of transformational change and systems logic, immediate policy changes spurred by the European Green Deal and growing citizen openness for a healthier, more sustainable and more resilient future post COVID-19. This foundational thinking is anchored ”in the first report to the Club of Rome “The Limits to Growth” and 50 years of multi-disciplinary and systems thought leadership spearheaded by the Club of Rome and its members.

Sandrine Dixson-Decleve, Co-President, The Club of Rome said “The COVID-19 pandemic is a transformative crisis that has exposed the vulnerabilities and lack of resilience of our health, social, economic, financial and political systems. Coming out of this crisis we need to ensure that governments and citizens understand that we are still in a planetary emergency created by humanity’s thirst for economic growth at all costs and a disrespect for our planetary boundaries. An optimised Europe for people-planet-prosperity is the positive narrative we need for Europe together with a new vision for Europe where the wellbeing of all citizens is guaranteed measured by new value-based indicators”.

Aileen McLeod, former MEP for Scotland and former Scottish Minister for the Environment, Climate Change and Land Reform commented, “This is the decade of action. With the brave leadership of the Von der Leyen Commission, now is the time to leverage, develop further and replicate in the EU the new economic models already being tested in some European countries and across the globe so as to offer real solutions for the transformational change people want to see in a post COVID-19 world. The Wellbeing Economy Governments of Scotland, Iceland, New Zealand and Wales have embraced a paradigm shift based on a more holistic economic model with the wellbeing of people and planet at the core of their plans for ensuring a just and fair green economic recovery post COVID”.

As we near the 50th Anniversary of “The Limits to Growth” report and its seminal thinking, the Club of Rome is launching a new multi-disciplinary programme with world leading scientific, economic, health and development experts that builds on the growing openness in public and political consciousness to transformational systems change. The Club of Rome stands by ready to work with the EU and global policy leaders in creating the resilient economic and societal models we so urgently need.