Global Population Blow-Up and After 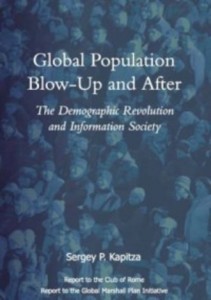 Of all global problems world population growth is the most significant. Demographic data describe this process in a concise and quantitative way in its past and present. Analysing this development it is possible by applying the concepts of systems analysis and synergetics, to work out a mathematical model for a phenomenological description of the global demographic process and to project its trends into the future. Assuming self-similarity as the dynamic principle of development, growth can be described practically over the whole of human history, assuming the growth rate to be proportional to the square of the number of people. The large parameter of the theory and the effective size of a coherent population group is of the order of 105 and the microscopic parameter of the phenomenology is the human lifespan. The demographic transition — a transition to a stabilised world population of some 14 billion in a foreseeable future — is a systemic singularity and is determined by the inherent pattern of growth of an open system, rather than by the lack of resources. The development of a quantitative nonlinear theory of the world population is of interest for interdisciplinary research in anthropology and demography, history and sociology, for population genetics and epidemiology, for studies in evolution of humankind and the origin of man. The model also provides insight into the stability of growth and the present predicament of humankind, and provides a setting for discussing the main global problems.