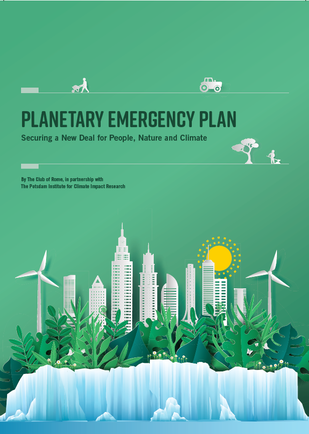 In September 2019, The Club of Rome launched The Planetary Emergency Plan on the sidelines of the UN Climate Action Summit in New York. The Plan, which was drafted in partnership with the Potsdam Institute for Climate Impact Research (PIK), provides a set of key policy levers addressing the cross-cutting challenges of climate change, biodiversity loss and human health and well-being. It outlines a vision of transformation and regeneration, a roadmap for governments to set in motion a decade in which the development path of our planet is steered onto one which is inherently beneficial for all living species, leaving no one behind. Its framing is simple yet compelling, a catalytic intervention designed to spur emergency action at the highest levels of decision-making. It is a novel contribution to the emergency debate, recognising the inextricable interconnectedness of the three challenges referred to above, and providing a new approach to conventional siloed policy action. Concretely, it combines a focus on protecting and restoring our Global Commons with implementing a series of economic and social transformations, to guarantee the long-term health and well-being of people and planet. The Plan was launched in the presence of a number of Heads of State and Government (Austria, Bhutan, Central African Republic, Costa Rica, Fiji, Monaco, Norway, Seychelles, UK) as well as First Vice-President of the European Commission for the European Green Deal, Frans Timmermans. The presentation of the Plan was part of an overall strategy to secure high-level commitments to a New Deal for People, Nature and Climate in 2020, underpinned by the adoption of a Planetary Emergency Declaration and concomitant Action Plan in the course of the “super year” of 2020. Combined with another, supporting event in New York at the Nature4Climate Hub, the launch enabled the Planetary Emergency Plan to be infused into international discussions on climate, biodiversity and sustainable development, providing The Club of Rome with unprecedented entry-points at the highest levels of decision-making. This was particularly exemplified by an invitation extended to The Club of Rome by the incoming First VP Timmermans’ cabinet to meet in Brussels and jointly explore how the Planetary Emergency Plan could be a guide for crafting the new European Commission’s flagship policy proposal, the European Green Deal (EGD). The Club also held a series of advisory meetings with the cabinet of the President of the European Commission, Ursula von der Leyen. Leveraging its network of thought leaders and practitioners, The Club distilled a wealth of knowledge, insight and policy proposals into an open letter and policy paper addressed to the cabinet, in view of the publication of a broad-strokes communication on the EGD on 11th December 2019. The document was based on the ten-year action framework outlined in the Planetary Emergency Plan, and makes concretes calls for transformative action from 2020 onwards, while also calling for the longer-term systemic shifts needed to truly emerge from the planetary emergency. The Plan will be a defining pillar of the Club’s work throughout the “super year” of 2020, a critical 12 months for people, nature and climate, as it seeks to secure the scale of emergency action required at the highest level of decision-making.

On 20 August 2020 the Club of Rome launched the Planetary Emergency Plan 2.0, which includes insights from the global pandemic and makes the case that we are unequivocally in the midst of a planetary emergency. COVID-19 has exposed our vulnerabilities and has reinforced the case for emergency action.