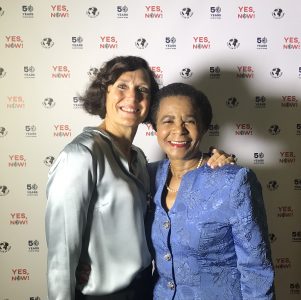 The Club of Rome appointed two women for the first time in its history to co-lead the organization at its AGM, which took place alongside the Club’s 50th anniversary conference in Rome, Italy.

Mamphela Ramphele (South Africa) and Sandrine Dixson Declève (Belgium) were appointed Co-Presidents. The Club of Rome first gained international attention with its best selling report “The Limits to Growth” in 1972. It has continued to provide a platform for leading scientists, economists, policy and business leaders to collaborate and promote leading edge thinking.

Its new co-presidents are expected to enhance the Club’s efforts to translate thought leadership into action as a response to growing ecological tipping points and the urgency in catalysing a new human civilization in harmony with nature. In practice the Co-Presidents will further collaboration with civil society, policy makers and the private sector and expand membership to more youth and representation from the South.

Dr. Mamphela Ramphele a medical doctor, author and outspoken advocate for human rights, serving as a Trustee of the Nelson Mandela Foundation and as an active citizen in her home country. After co-founding the Black Consciousness movement in her native South Africa in the 70s with Steve Biko, enduring a personal ban under the apartheid regime, Dr. Ramphele went on to forge a stellar career. She was previously one of four Managing Directors of the World Bank in Washington DC, Vice-Chancellor of the University of Cape Town and led South African political party, Agang SA

“The Club of Rome ought to be a catalyst for the emergence of a new human civilization in harmony with
nature, by leveraging the complementary innovative capacities of the network of networks of its members. In
that context it is important to me to particularly influence engagement from my own continent, Africa. We want
to generate a new way of becoming a prosperous, sustainable continent which celebrates human dignity and
common good”, says Mamphela Ramphele.

She is a respected facilitator and lecturer on climate change, green growth, conventional and sustainable energy, and has worked for and advised international organisations such as the UN, OECD, OPEC, European Institutions as well as HRH The Prince of Wales, and respected CEOs of some of the world’s largest companies. She continues to serve as a special advisor for C suite clients, governments, Academic Institutes and non governmental organisations.

“The latest IPCC report is a stark wake up call that the existential threat posed by climate change means
‘business as usual’ is no longer an option. We have to stop talking about incremental actions and start promoting
a vision for transformation. The Club of Rome will take a leading role in pushing the boundaries for feasible
solutions and actions that can deliver economic prosperity and the security of people, nations and the planet in a
time-frame consistent with the science.”, says Sandrine Dixson Declève.