The Scandal and the Shame 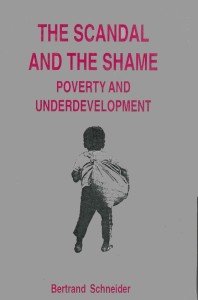 Who really cares about development, despite the vast industry that has grown up around it? Are we prepared to tolerate the ever growing gap between rich and poor despite forty years of effort and countless millions spent on aid?

There are open and hidden scandals of underdevelopment and poverty. The author underlines wasted and inappropriate aid, the scandal of diverted aid, of development profiteers. He shows the World Bank as a typical case of misguidance, and the costly disorder in UN agencies.

Starvation, inequality, structural adjustment policies and their human consequences reflect the present situation. Bertrand Schneider suggests a new concept of development: the Well-Being of Individuals and Societies Everywhere (WISE) and a number of strategic applications of the concept, for example empowerment through rights to property, a radical new approach to development financing, measures to combat corruption, education, population control, strengthening the role of civil society and NGOs. These measures require tough decisions involving not only international institutions, but also member states.